Number of Visitors Since 2017

Am I Hiphop Enough For You Yet?
by Chantel Martin 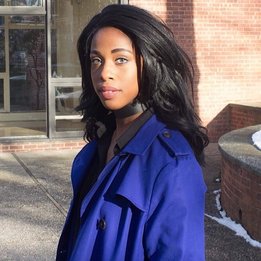 Chantel Martin, age 22, is currently a student at Five Towns College. She is finishing her final semester as a music business management major. Chantel's appreciation for hip hop music and culture came from dancing and poetry. Although, hip hop wasn't necessarily played around the house, Chantel's mother never stifled her interest in the music. Chantel's mother saw it as a way for her daughter to learn how to be a better songwriter. As she revisits the songs of rappers like Lauryn Hill, 2Pac, Missy Elliott and Kayne West, Chantel has a newfound love for the artists, their creativity and their music. The influence she has gained from the genre and its liaisons has molded her into an accomplished dancer and singer/songwriter. Currently, Chantel is completing her first mini-LP, Me + U, which is slated for digital release in June.
“5,6,7,8!” is how Hip Hop was introduced to me in 2002. It was a Saturday morning in September and I signed up for a Hip Hop dance class for ages 7 through 10. At first, I was excited! Mother had asked me several days earlier if I wanted to take a dance class and learn some moves. Instantly, I said yes. What kid did not want to learn how to b-boy and spin on their heads??!! In my mind, that's what Hip Hop was all about. I was going to be just like Kelly/ “Special K” from the 80's movie Breakin'.  I would be the coolest child at school—Special C! I had it all figured out, or at least I thought I did. In a twist of events, when my mother signed me up for class and then left, Special-C left the building and Insecure C took her place. Although, she informed me that she’d return within an hour, I still wept and I wailed in front of the other children and their parents. That was not gangsta.
​
I’ve never been what LL Cool J described as an “around the way girl.” I was into anime, I was skinny and only like R&B/Pop songs, so when I heard women in Hip Hop expressing themselves without singing, using an expansive vocabulary and not reveal their bodies like li’l Kim, I was impressed. I researched and learned the raps of both Hill and Lopes because I wanted to be as intelligent as they were. Their glorification (of intellect) led to my imitation. I wanted to rap about my intelligence and inspire people. I also appreciated the wittiness of these women’s rhymes (once I got through Google searching the meanings of specific words/lines). To this day, I remember pieces of lyrics I wrote to songs that will never see the light of day. Songs that my dorkier-self refused to alter the syntax for, even if it would have saved the rhythm and flow of the raps. One was a break up song called “Goodbye” in which I said:
I decided to stuff my training bra with a du-rag, and perm my hair because boys liked rappers and rappers like girls with curves and long hair. I was waif thin, the only fat was in my lips and my hair was always in box braids or cornrows. Special C, was feeling Less-Than-Special. On top of that, throughout high school, I would opt to go off to the library for my lunch period as opposed to socializing with my peers and surround myself with moldy books instead of dialogue. Let’s not talk about sex? No, let’s not talk at all. Why? Well, because I was always in the library. Not sexy, at all.
​